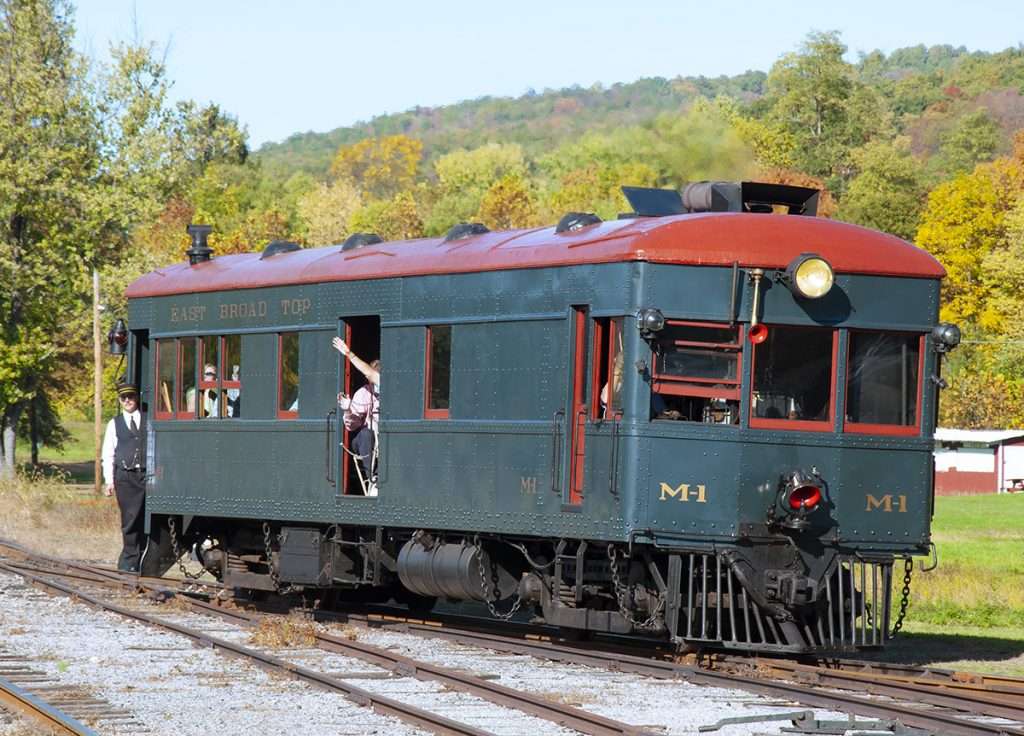 The grant is among 22 donations totaling nearly $325,000 that were announced recently by the trust, which backs preservation efforts linked to what the trust’s founder, John H. Emery, called “the golden age of passenger rail” — 1920 to 1960. The M-1 has a 12-seat passenger compartment as well as a compartment for freight and, importantly, sacks of mail. While it was under construction, one of the EBT’s 19th-century passenger coaches was rebuilt with roller-bearing wheelsets to serve as the M-1’s trailer when necessary.

“The Emery Trust is proud to assist the EBT Foundation in its quest to maintain and operate such a rare and wonderful piece of railroad history,” said Jim Fetchero, a member of the trust’s three-person Advisory Committee. “We can’t wait to see the new roof on the M-1 in the near future.”

Brad Esposito, the East Broad Top’s general manager, said that the M-1 had been “extremely well maintained” over the years, but that the current roof needs to be replaced to protect the interior. “It’s a vital and unique piece of equipment,” he said, that will let the reopened EBT accommodate small numbers of visitors on days when a steam locomotive hasn’t been fired up. The EBT is grateful for the Emery Trust’s generosity and its support”.

The M-1 was designed by the J.G. Brill Company with electric components from Westinghouse. It was assembled in the East Broad Top’s shops and is believed to be the only American narrow-gauge motorcar ever built in which a gasoline engine powers a generator, which in turn powers electric motors on all four axles. The M-1 covered the mail runs and filled in elsewhere as necessary as passenger traffic waned. The M-1 saved the railroad money because it required fewer crew members to operate than a steam train, and was also easier and cheaper to maintain. It has never been out of service for a significant period. The Foundation has already run the M-1 for several special events and expects to begin running trains on a regular schedule this coming summer. The Emery Trust has also supported an ongoing project at the EBT’s neighbor, the Rockhill Trolley Museum, which is overhauling a high-speed interurban car built in 1909.

The East Broad Top Railroad, a National Historic Landmark, is the only original narrow-gauge railroad to survive east of the Rocky Mountains. It was completed in 1874 to service the iron furnaces and coal mines along a 33-mile corridor. The railroad closed in 1956 and was sold to the Kovalchick family, which reopened the line as a steam-powered tourist railroad. The EBT Foundation acquired the railroad in February of 2020 and has begun an extensive restoration effort with the goal of returning to regular service in 2021. The railroad’s website, eastbroadtop.com, has information about events and schedules.