The East Broad Top Railroad will celebrate the 60th anniversary of its first reopening — and the 260th anniversary of the founding of Orbisonia, Pa. — with three days of short train and trolley rides, ice cream, and tours of the National Historic Landmark’s newly stabilized machine shops and the updated roundhouse work space. The celebration will take place August 13-15. 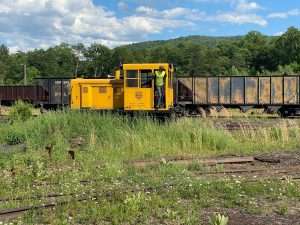 The dates coincide with the traditional Orbisonia/Rockhill Furnace Homecoming, and local organizations, including the Orbisonia-Rockhill Volunteer Fire Company and the Orbisonia Lions Club, are working to incorporate a number of Homecoming traditions into the 60th Anniversary celebration, including a parade, food and craft vendors, a vespers service, and more. Some events are being planned for the traditional Homecoming grounds across from the EBT station, and others for the Lions property in Orbisonia. Details will be announced as they become available.

The East Broad Top is committed to making the celebration as safe as possible for everyone despite the current pandemic concerns. The railroad will use its open cars for passengers and will strictly limit capacity by requiring that tickets be purchased in advance. Tickets are expected to go on sale June 22 on the railroad’s web page, and will be timed to limit the number of people on the railroad’s property at any given moment. The railroad’s cars and bathrooms will be cleaned and sanitized regularly. 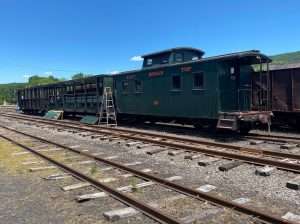 Trains will be pulled by one of the railroad’s diesel locomotives while work continues to restore two of the EBT’s steam engines to operation. Historic equipment will be on display by the EBT station and in the yard. Each ticket will also entitle the bearer to a ride on a historic streetcar at the adjoining Rockhill Trolley Museum, a treat from the Little Ice Creamery, and a walking tour through the EBT machine shops and roundhouse.

The fire company and the Lions Club will each oversee the events and vendors at their locations. Amanda Jenkins, who had been organizing a Homecoming event that was originally scheduled for July, has been instrumental in coordinating planning efforts among her volunteers, the railroad, the fire company, and the Lions.

August 13 will mark the anniversary of the 1960 revival of the East Broad Top, which had been shut down in 1956 and sold. But the new owner, Nick Kovalchick, did not scrap the line, and instead offered to run trains when Orbisonia and its sibling, Rockhill Furnace, celebrated their bicentennial. Kovalchick family members expected to attend a special ceremony include Nick’s son Joe and Joe’s wife, Judy, longtime operators of the EBT, as well as Joe’s sister, Millie, who also participated in the 1960 reopening ceremony and had locomotive No. 12 named for her.

The Kovalchicks recently sold the East Broad Top to a new nonprofit organization, the EBT Foundation Inc., which is rebuilding track, overhauling locomotives and cars, improving facilities, and making plans for future operations. The foundation hopes to begin running steam-powered excursions in 2021.

More events will be added as the year progresses. Check this page often, or sign up for our email list for updates.