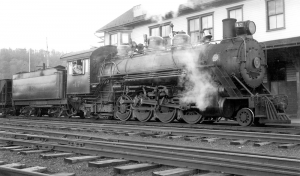 Birth of A Legend

1856: The East Broad Top Railroad receives its charter from the Pennsylvania legislature

1872: After numerous construction delays, including the Civil War, construction of the railroad begins in Mount Union. Shortly before, the directors decided to save money by building a 3ft. narrow-gauge line. This allows them to construct sharper curves and lighter bridges with smaller rail. It would also mean that the EBT could not interchange cars with other railroads.
1873: Construction reaches Rockhill Furnace and passenger service begins.
1874: The rails reach the small company town which would become Robertsdale on Broad Top Mountain. The mountains folded seams of semi-bituminous coal will eventually be riddled with tunnels stretching far from the initial entrances behind the Robertsdale Station.
1876: Production begins on the new Rockhill Iron Furnace. Unlike earlier versions which would produce 800 tons of pig iron per year, this new mechanized facility would be capable of producing 28,800 tons annually.
1900 - 1903 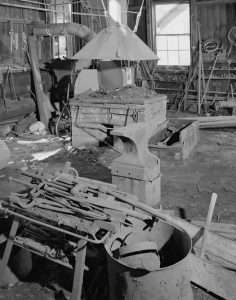 1900: The first fire-brick plant opens in Mount Union. Transporting coal and ganister rock to Mount Union’s fire-brick plants becomes a key part of the EBT’s business after the Rockhill iron furnace finds itself unable to compete with more modern operations and better iron ores in the upper Midwest.

1903: Robert Seibert becomes the EBT’s president and begins a major modernization campaign that will eventually encompass track, bridges, locomotives, rolling stock, and repair facilities. The EBT as we know it today is largely the product of Siebert’s policies and plans. 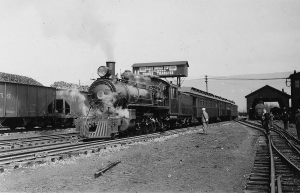 1906: The current EBT station is built in Rockhill Furnace. To avoid confusion with another destination called “Rockhill,” the station is eventually named “Orbisonia,” after the larger town on the other side of Blacklog Creek. The station receives its current platform canopy in 1909.

1924: The railroad builds a crane in Mount Union for transferring timber from its own cars to standard-gauge cars. The Timber Transfer becomes famous in the 1930s when the EBT starts using it to lift standard-gauge cars off their wheels and set them on narrow-gauge wheelsets to be pulled in EBT trains.

1925: A new coal-cleaning plant opens in Mount Union. The plant is served by a dual-gauge yard with three rails for every track, accommodating both narrow-gauge and standard-gauge cars. This allowed the EBT to load coal easily for customers elsewhere. 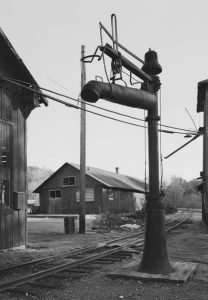 End of An Era

1927: The EBT builds the M-1 using plans and parts from the J.G. Brill Co., a trolley manufacturer, and Westinghouse Electric. The M-1’s 250-h.p. gasoline engine powers a generator that feeds electricity to motors on all four axles. A 12-seat passenger compartment accommodates riders, while a freight compartment carries packages and the U.S. mail. It is the only such gas-electric unit ever built for an American narrow-gauge railroad.

1936: The EBT operates its first trip for railfans.

1942: The EBT builds its last new branch, a steep spur track up to a North American Refractories Company ganister quarry on Jack’s Mountain.

1955: The coal business having dwindled to almost nothing, the railroad files for abandonment in November.

1956: The last mainline runs, pulled by No. 17, operate on April 6. The last switching moves in Mount Union, by No. 3, follow on April 13. Shortly thereafter, the Kovalchick Salvage Company buys the assets of the railroad and the Rockhill Iron and Coal Company. But almost nothing is scrapped. 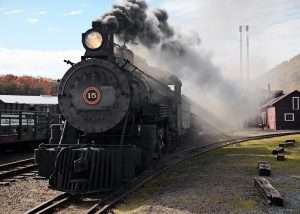 1982: Friends of the EBT is organized, initially for model railroaders.

2002: FEBT volunteers begin the first of many restoration projects in Rockhill, the section shed at the south end of the yard.

2011: At the end of a busy season featuring both Thomas the Tank Engine and the Polar Express, the EBT’s final train of the year operates on December 23. The railroad then closes, although FEBT volunteers continue stabilization and restoration projects, and occasional public tours are offered.

2020: The EBT Foundation purchases the railroad from the Kovalchicks. The EBT Foundation’s mission is to preserve and operate the East Broad Top as a steam-powered railroad; to educate visitors about the role of railroads in local and national history, and to promote local and regional tourism and economic growth.