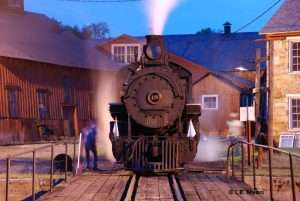 The East Broad Top is many things — a delightful family destination, a National Historic Landmark, a great volunteer opportunity, an unparalleled preservation undertaking, and more. The railroad, which was built beginning in 1872, is the only surviving three-foot gauge common carrier railroad east of the Rocky Mountains. And its shops, parts of which date to the 1880s, are among the best-preserved examples in the U.S. of a late-19th-century/early-20th-century industrial complex — in this case, powered by an overhead belt system driven by a stationary steam engine.

The railroad is currently owned by the EBT Foundation. This 501(c)(3) nonprofit organization oversees the daily operation of the railroad and ensures its continued preservation.